The stomach contains cells that secrete different substances as part of the digestive process: parietal cells, chief cells, and surface epithelium cells. See an image of the stomach and these cells in Figure 7.2.[1]

are found within the lining of the stomach and secrete mucus as a protective coating. Parietal cells and chief cells are found within the gastric glands. produce and secrete hydrochloric acid (HCl) to maintain the acidity of the environment of a pH of 1 to 4. Parietal cells also secrete a substance called , which is necessary for the absorption of vitamin B12 in the small intestine. Parietal cells are the primary site of action for many drugs that treat acid-related disorders. Chief cells secrete pepsinogen that becomes , a digestive enzyme, when exposed to acid. The stomach also contains enteroendocrine cells (ECL or enterochromaffin-like cells) located in the gastric glands that secrete substances including serotonin, histamine, and somatostatin. G cells in the stomach secrete gastrin that promotes secretions of digestive substances. Although these cells play an important role in the digestive system, acid-related diseases can occur when there is an imbalance of secretions. The most common mild to moderate hyperacidic condition is , often referred to by patients as heartburn, indigestion, or sour stomach. GERD is caused by excessive hydrochloric acid that tends to back up, or reflux, into the lower esophagus. See Figure 7.3 for an illustration of GERD.[2]

occurs when gastric or duodenal ulcers are caused by the breakdown of GI mucosa by pepsin, in combination with the caustic effects of hydrochloric acid. PUD is the most harmful disease related to hyperacidity because it can result in bleeding ulcers, a life-threatening condition.

is another common condition that can occur in hospitalized patients leading to PUD. Thus, many post-operative or critically ill patients receive medication to prevent the formation of a stress ulcer, which is also called .[3] See an image of a duodenal ulcer in Figure 7.4.[4]

Assessments: Whenever a nurse administers hyperacidity medications, there are common assessments that should be documented, such as an abdominal assessment and documentation of bowel patterns. During therapy, the nurse should continue to assess for potential medication interactions and side effects and be aware that vitamin B12 malabsorption may occur whenever stomach acidity levels are altered. Based on the category of medication, renal and liver function may require monitoring. Additionally, if a patient complains of chest pain, the nurse should perform a complete focused cardiac assessment and not assume it is GI-related because patients may erroneously attribute many cardiac conditions to “heartburn.”

Implementation: The nurse should read the drug label information and follow the recommendations for administering hyperacidity medications with other medications or the intake of food. Cultural preferences should also be accommodated when safe and feasible because the patient may believe in alternative methods for treating GI discomfort. A written plan of care with modifications for safe use of medications with these alternative methods may be required.

Evaluation: Patients should experience improvement of symptoms within the defined time period; if not, the provider should be notified. Increased pain or new symptoms of coughing/vomiting of blood should be immediately reported because these symptoms can be signs of a life-threatening bleeding ulcer.

There are four major classes of medications used to treat hyperacidity conditions: antacids, H2-receptor antagonists, proton pump inhibitors, and mucosal protectants. Each class of medication is further described below.

Antacids (see Figure 7.5[7]) are used to neutralize stomach acid and reduce the symptoms of heartburn. There are many OTC medications available for this purpose, such as calcium carbonate, aluminum hydroxide, and magnesium hydroxide. Calcium carbonate is the prototype discussed as an example. Be sure to read drug label information regarding antacids as you administer them because each type has its own specific side effects. Many antacids also contain simethicone, an antiflatulent used for gas relief. Simethicone is further described in the medication grid below. 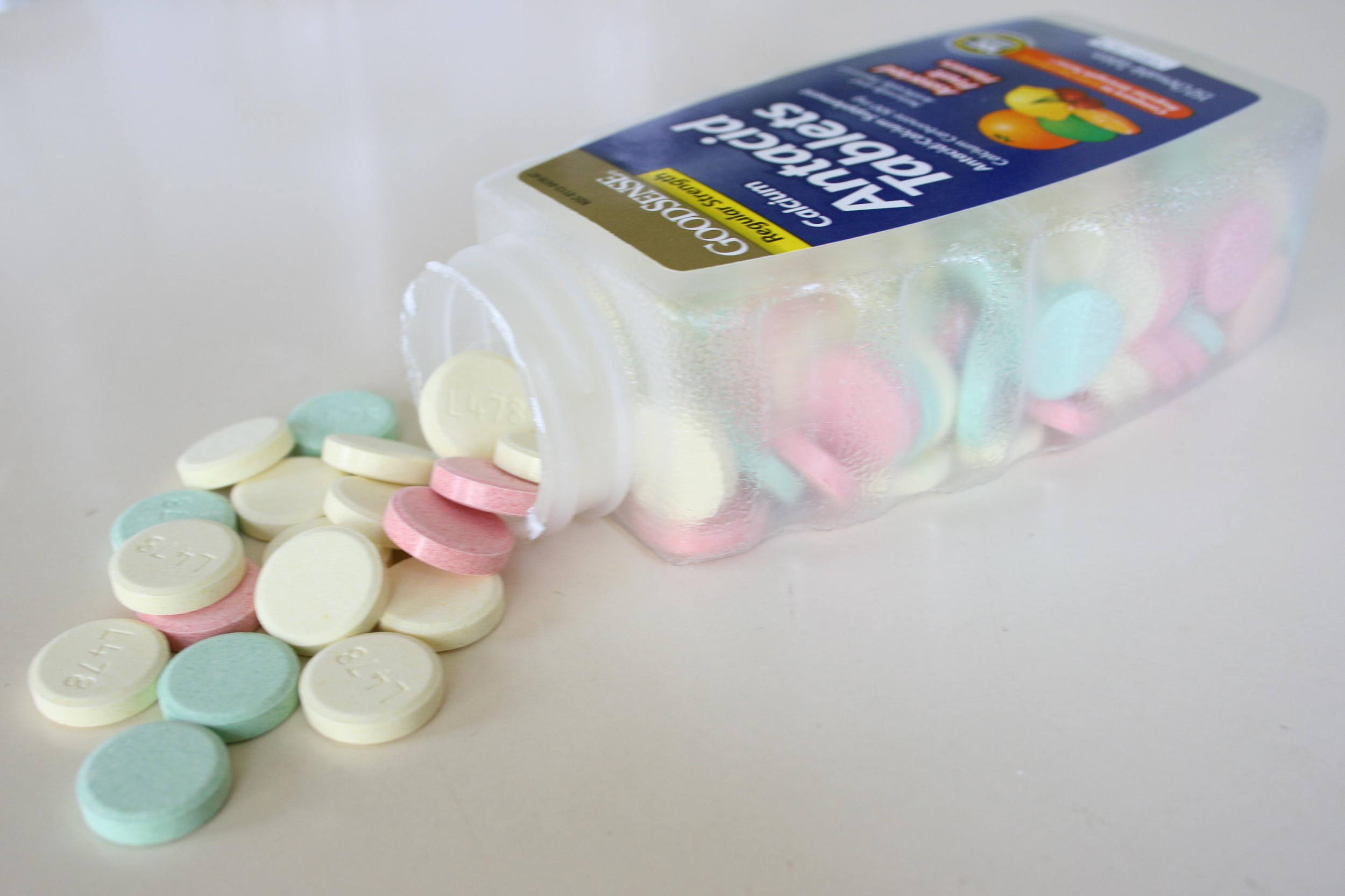 In addition to the information under “Specific Administration Considerations,” patients should be reminded to take OTC meds appropriately as prescribed and to not exceed the maximum dose. Other interventions to prevent hyperacidity can also be recommended, such as smoking cessation and avoiding food and beverages that can cause increased acidity (alcohol, high-fat or spicy foods, and caffeine). [9],[10],[11],[12]

A common H2-receptor antagonist is famotidine. It is available OTC and is also often prescribed orally or as an IV injection in the hospital setting. Other H2-receptor antagonists include cimetidine and ranitidine. Cimetidine has a high risk of drug interactions, especially in elderly patients because of its binding to in the liver, which affects the metabolism of other drugs.

H2-receptor antagonists block histamine’s action at the H2 receptor of the parietal cell, thus reducing the production of hydrochloric acid.

To prevent symptoms, oral famotidine is taken 15 to 60 minutes before eating foods or drinking drinks that may cause heartburn. Preexisting liver and kidney disease may require dosage adjustment. Famotidine is supported by evidence as safe for use in pediatric patients younger than 1 year old, as well as in geriatric patients.

Patients taking the oral suspension should be instructed to shake it vigorously for 5 to 10 seconds prior to each use. [14],[15] The medication may cause constipation so fluids and high-fiber diet should be encouraged.  Additionally, smoking interferes with histamine antagonists and should be discouraged.[16],[17]

A common proton pump inhibitor (PPI) is pantoprazole (see Figure 7.7[18]). It may be prescribed in various routes including orally, with an NG tube, or as an IV injection in the hospital setting. Other PPIs include esomeprazole, lansoprazole, and omeprazole. PPIs are more powerful than antacids and H2-receptor antagonists. 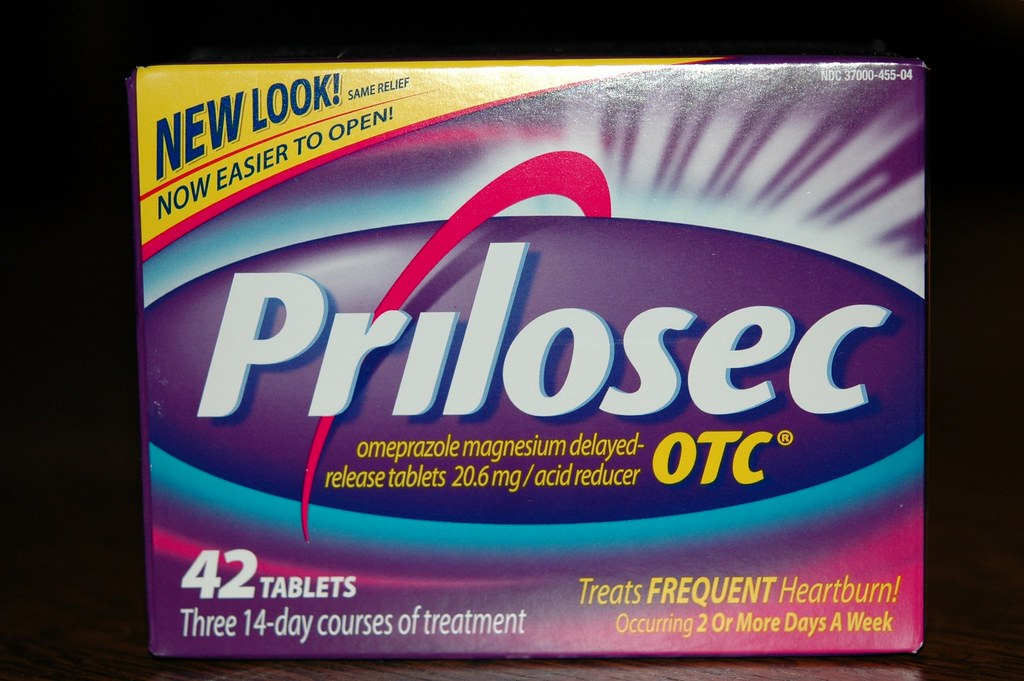 Pantoprazole is used to treat damage from gastroesophageal reflux disease (GERD) in adults and children five years of age and older by allowing the esophagus to heal and prevent further damage. It is also used to treat conditions where the stomach produces too much acid, such as Zollinger-Ellison syndrome in adults. PPIs may also be given in combination with antibiotics to treat H.Pylori infections, a common cause of duodenal ulcers.

PPIs bind to the hydrogen-potassium ATPase enzyme system of the parietal cell, also referred to as the “proton pump” because it pumps hydrogen ions into the stomach. PPIs inhibit the secretion of hydrochloric acid, and the antisecretory effect lasts longer than 24 hours.

Packets of delayed-release granules must be mixed with applesauce or apple juice and taken by mouth or given through a feeding tube. Consult the labeling of concomitantly used drugs to obtain further information about interactions because PPIs can interfere with the liver metabolism of other drugs.  IV pantoprazole can potentially exacerbate zinc deficiency, and long-term therapy can cause hypomagnesemia, so the nurse should monitor for these deficiencies.

In addition to the considerations above, instruct patients to call their provider if their condition does not improve or gets worse, especially if bleeding occurs.[19],[20]  Use of alcohol, NSAIDS, or foods that cause GI irritation should be discouraged.[21],[22]

Sucralfate is a mucosal protectant used to cover and protect gastrointestinal ulcers.

Sucralfate is used in the treatment of ulcers.

Sucralfate locally covers the ulcer site in the GI tract and protects it against further attack by acid, pepsin, and bile salts. It is minimally absorbed by the gastrointestinal tract.

Administer sucralfate on an empty stomach, 2 hours after or 1 hour before meals. Constipation may occur. Sucralfate should be cautiously used with patients with chronic renal failure or those receiving dialysis due to impaired excretion of small amounts of absorbed aluminum that can occur with sucralfate.

In addition to the considerations above, instruct patients to call their provider if their condition does not improve or gets worse. [23],[24],[25],[26]

Simethicone is an antiflatulent that is commonly found in other OTC antacids (see Figure 7.8[27]).  It is also safe for use in infants. Gas commonly occurs in the GI tract due to digestive processes and the swallowing of air. Gaseous distension can also occur postoperatively.

Simethicone is used to treat the symptoms of gas such as uncomfortable or painful pressure, fullness, and bloating.

Simethicone works by altering the elasticity of the mucous-coated gas bubbles, which cause them to break into smaller bubbles, thus reducing pain and facilitating expulsion.

Simethicone is usually taken four times a day, after meals and at bedtime. For liquid form, shake drops before administering.

Patients can be instructed about other measures to assist with gas expulsion such as changing position, ambulation, avoiding the use of straws, and tapering intake of beans and cruciferous vegetables. [28],[29],[30],[31]

A patient who recently underwent surgery has a medication order for daily pantoprazole. The nurse reviews the patient’s medical history and finds no history of GERD or peptic ulcer disease. The patient does not report any symptoms of heartburn, stomach pain, or sour stomach. The nurse reviews the physician orders for an indication for this medication before calling the provider to clarify.

What is the likely indication for this drug therapy for this patient?

Note: Answers to the Critical Thinking activities can be found in the “Answer Key” sections at the end of the book.

Cells found within the lining of the stomach that secrete mucus as a protective coating.

Necessary for the absorption of vitamin B12 in the small intestine.

Caused by excessive hydrochloric acid that tends to back up, or reflux, into the lower esophagus.

Occurs when gastric or duodenal ulcers are caused by the breakdown of GI mucosa by pepsin in combination with the caustic effects of hydrochloric acid.

A common condition in hospitalized patients that can lead to PUD.

Medication to prevent the formation of stress ulcers.

Elevated levels of calcium in the bloodstream.

A side effect of medication causing elevated levels of hydrochloric acid in the stomach after the medication is discontinued.

Enzymes produced from the cytochrome P450 genes involved in the formation (synthesis) and breakdown (metabolism) of various molecules, chemicals, and medications within cells.

Nursing Pharmacology by Open Resources for Nursing (Open RN) is licensed under a Creative Commons Attribution 4.0 International License, except where otherwise noted.